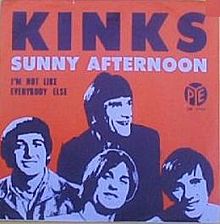 History is littered with obscure tracks and b-sides by artists that far exceed the standards of the artists’ singles & album tracks. The Cure, Joy Division, New Order, Oasis, The Beatles – those are just a few of the major bands that made it a practice to keep up high quality no matter where the song was being released. The summer of ’66 saw The Kinks release the single Sunny Afternoon backed by I’m Not Like Everybody Else. The A side was a a slice of musical hall whimsy that was a hit single. The B side – well, it just might be the best B side in history. A stunning slab of garage rock, it bears traces of the punk movement that would come into focus a decade later. Written by Ray Davies but sung by his brother Dave, it is an anomaly in The Kinks discography. It has that timeless quality – the lyrics might be directed at a woman, but you can sing along and use the chorus to reaffirm everything that makes you unique. Anger, isolation, and sweetness collide in winning fashion. A revamped version was cut in the mid 90’s with Ray Davies singing instead of Dave, and it also added a bit of hard rock muscle – this was the version used in the hit show The Sopranos. I like both versions, but prefer the original. Notably, the song has also been covered by the Television Personalities and Peter Perrett’s post The Only Ones band, The One. “If you all want me to settle down / Slow up and stop all my running ’round / Do everything like you want me to / There’s one thing that I will say to you / I’m not like everybody else / I’m not like everybody else”