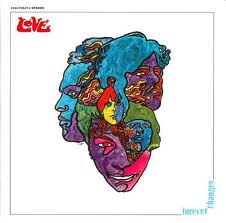 The summer of 2002 was my first summer in the Seattle, WA area. Coming from the Philadelphia, PA region you could call this culture shock (to put things lightly). No unbearable humidity, heat that barely hit 90 for less than a week in August, and salt water that was about 20 degrees cooler than I was used to (both in Puget Sound and the Pacific Ocean). It was also the 35th anniversary of what is known as “the summer of love” – 1967. That glorious year where every great album in the history of music came out (may be exaggerating a bit there). The Beatles, The Doors, Jimi Hendrix, Pink Floyd, and Love all released critically acclaimed albums (just to name a few household names – there are literally hundreds of great records from this time period). Articles proclaiming the brilliance of these bands / records seemed to be popping up in publications and though I was familiar with most, I hadn’t yet picked up Forever Changes by Love (though I had an old compilation which had some of the songs).