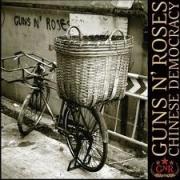 Attack of the Killer Track! is a series that explores lesser known tracks from artists from a variety of genres. Some of the tracks were singles, some of them were obscure b-sides or long forgotten album tracks. One thing is certain – all of them are killer tracks.

The running joke about Guns N’ Roses up until the actual release of 2008’s Chinese Democracy was always along the lines of whether or not the album would actually be released. Years of rumors, press releases that promised a forthcoming album, and generally odd happenings surrounding singer Axl Rose plagued the band for almost 14 years or so (curiously, a much shorter time frame than what transpired for My Bloody Valentine‘s long delayed new album). All of the build up for a record from a band that had been one of the biggest bands in the world led me to believe that the reviews from the hip review sites of the world would be fair to middling – and I was right. I don’t think the album is quite a masterpiece, though I do love it. I will say that one of my favorite Guns N’ Roses songs of all time is on this record though. “This I Love” reminds me of the early 90’s ballads that Guns N’ Roses perfected, but with one of the most heartbreaking vocal performances of Axl Rose’s career. The emotion seems to pour out of him as the piano accompanies his despair. It is a classic rock track of unrequited love and is an overlooked masterpiece. I think you’ll agree with me as you sing along with Axl Rose to these heartbreaking lyrics: