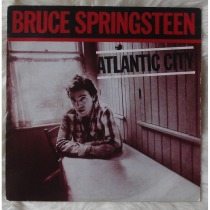 In early 1982 Bruce Springsteen demoed songs for the follow-up album to his hit double LP, The River. He holed himself up in his New Jersey home and cut stark home demos that reflected the personal cloud of depression he was going through. Usually the characters on the previous records had found some sort of saving grace – not so on the songs that would become the record Nebraska. The E-Street band versions of the songs were rejected in favor of the stark demo versions and the record was released to critical acclaim in September of 1982. Johnny Cash covered two of the darker tunes just a year later (Johnny 99 and Highway Patrolman) and Sean Penn wrote & directed the 1991 film Indian Runner which was based on the song Highway Patrolman. I love the entire album, but I’ve always thought the track Atlantic City pulled off a neat trick – it wraps a somewhat depressing story to a hopeful melody and layers it with a quality that is hard to capture on tape – desperation.