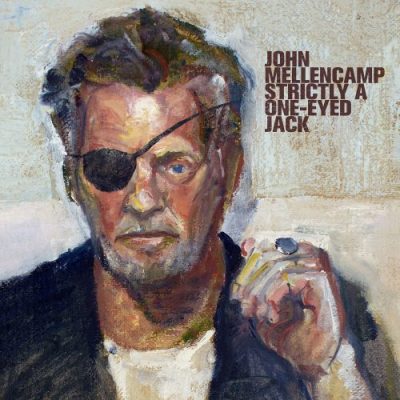 The genesis of John Mellencamp’s career is one of the more unique stories in rock n roll history. Forced to change his name to John Cougar in the 70’s before eventually moving back to his given name (with a middle phase as John Cougar Mellencamp), he’s long since overcome the accusations of being a Midwest Bruce Springsteen. His hit making days of the 80’s and 90’s gave way to restless experimentation (Chuck D of Public Enemy on a Mellencamp album? See 2001’s Cuttin’ Heads) which gave way to stripping it all back to the roots of rock. The last 15 years or so have seen Mellencamp develop a cigarette influenced vocal approach that reminds me of Tom Waits. It’s also proved to be a rewarding time to be a John Mellencamp. His 1st album of the 20’s – Strictly A One-Eyed Jack was released just a few weeks ago and it might be his strongest album since 2008’s Life, Death, Love and Freedom. Those Bruce Springsteen comparisons? Not applicable – but Springsteen guests on 3 songs and adds a warmth to these songs that is welcome.

I Always Lie To Strangers creaks to life, Mellencamp growling his way through the song, backed by a haunting acoustic guitar refrain. This is about as dark of a Mellencamp song as I’ve ever heard. The string accompaniment harkens back to another time in Mellencamp’s career – but with a wistful vibe. “This world is run by men / Much more crooked than me / And as far as I can see / I don’t trust you / And you shouldn’t trust me / I always lie to strangers” Streets of Galilee is Mellencamp doing Johnny Cash during his Rick Rubin years. Acoustic and haunting – it is a beautiful song that has emotional resonance. Despite the title, this isn’t a religious song. This is another bleak entry in the songwriter’s oeuvre.” Well, I don’t grovel, and I don’t pander / Give a fuck what you say / I don’t need you; you don’t need me / I think we both should disappear / Onto the streets of Galilee” Did You Say Such A Thing is the most “rock” feeling song here and is the 1st song featuring Bruce Springsteen. It has a roots rock vibe to it, with the lyrics smacking down the gossipers. It’s a fun work out and a much-needed moment of levity on a fairly dark album. Wasted Days is the 1st single from the album and also features Bruce Springsteen. The music is uplifting and catchy, a nice contrast to the dark lyrics. All about the passage of time, it hits hard coming from Bruce Springsteen and John Mellencamp. They trade verses and harmonize over the chorus. It’s the most radio friendly song either artist has released in ages. It’s perfect. “We watch our lives just fade away / To more wasted days” A Life Full Of Rain again features Bruce Springsteen and is a beautiful way to close out the album. Piano, atmosphere, and a bluesy vocal performance. Musically, it is restrained – feeling like it will reach a crescendo but pulling back – bringing the listener to the emotional center. It’s quite a performance from the band, Bruce Springsteen, and John Mellencamp – again trading off verses. A perfect closer.

Strictly A One-Eyed Jack isn’t a perfect album – but it is an incredibly strong album. Bruce Springsteen is a welcome guest on a handful of songs. If you haven’t listened to Mellencamp in years, you may be in for a surprise – he’s in a different zone than the sounds of yore. I’d probably rate this as my 2nd favorite Mellencamp album of the 2000’s. (Life, Death, Love and Freedom is a tough one to top). High praise indeed.