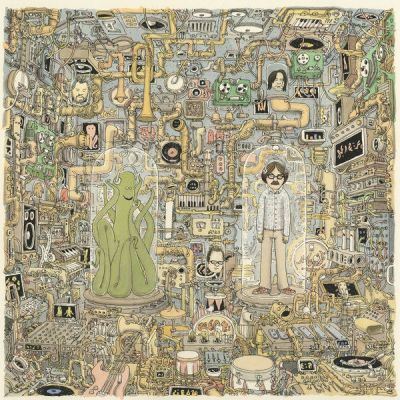 Not too long ago, there was a Saturday Night Live skit that had Matt Damon playing the world’s biggest Weezer fan, much to the chagrin of Leslie Jones – who was adamant that Weezer made two great albums – 1994’s Blue Album and 1996’s Pinkerton – before losing their muse and becoming corny. I’ve seen variations of that argument play out on chat boards over the years and read snobby reviews of their modern albums. It has never failed to bring a smile to my face. Anyway, in case you were wondering, I related more to the Matt Damon character. He states he is “Weezer Ride or Die” – and I actually own a t-shirt with that slogan. Not every Weezer album is great, but there are gems on each album. I continue to be amazed by the indie elitism espoused by fans of only their first two albums. Their loss, I suppose. 2021 promises two Weezer albums. Van Weezer will be out in May and promises to be Weezer’s heavy metal inspired album. But first, we have OK Human – an album recorded with a full orchestra at the famous Abbey Road Studios in London. It just may be my favorite Weezer album since the early days.

The sound of the album is quite different from anything else in Weezer’s discography. Strings are at the forefront, nary a guitar to be found. Lyrically, this may be some of the most personal stuff Rivers Cuomo has committed to tape since Pinkerton. The orchestration does call to mind The Beach Boys of the 60’s, but I found myself thinking more of the classic records by Harry Nilsson just a bit more. There’s a vulnerability here that is appealing with very few signs of weakness. Will this record convert any new fans? Maybe. Will it change the minds of the music snobs stuck in the 90’s? Probably not. But who cares, good music is good music. And OK Human delivers in spades.

All My Favorite Songs leads off the album is the 1st single. It’s a nice contrast of joy and sadness, imbued with strings that soar. “All my favorite songs are slow and sad / All my favorite people make me mad”. Catchy opening lines to the album and serves notice that this isn’t quite like any other Weezer album. Numbers is easily my favorite song on the album. It sounds like something off of a late 60’s Harry Nilsson album. The band perfectly is in sync with the orchestration on this song. Longing and sadness are present in Cuomo’s vocals – a really impactful delivery on display. This is immediately followed by Playing My Piano – a anthem for these solitary times. The strings swirl creating a theatrical atmosphere. “My wife is upstairs / My kids are upstairs / And I haven’t washed my hair in three weeks / I should get back to these zoom interviews / But I get so absorbed and time flies / I just can’t let go / When I’m playing my piano”. Screens feels like the most traditional Weezer song – but even so, it is all strings & things. Lamenting the zombie like modern smart phone culture, it’s extremely catchy. Alternative rock by way of middle age. Dead Roses is a sad lament to unrequited love. It builds an atmosphere that calls to mind Odesssa by the Bee Gees whilst staying true to Weezer vibes. It is a late album highlight.

Another year, another Weezer album with another one on the way. Still, this one feels unique and I loved it. I veered towards the slow, sad songs. Your mileage may vary. Highly recommended.

For Fans of: The Beatles, The Beach Boys, Bee Gees, Harry Nilsson