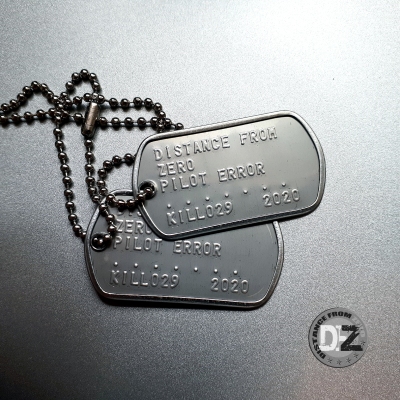 Symmetry presents itself in many different ways. In 2020 – at least in my life – this has emanated in unusual ways. A move back to the Philadelphia region entailed a 3,000-mile drive in a Honda Civic. The last time I moved cross country 18 years ago to Seattle it also involved a long drive in a Honda Civic. Peculiar. Anyway, the challenges this year have contained multitudes, and yet as the year closes out I find myself in pretty much the same state I was in as the year started. Anyway, this is all a preamble to the fact that I’ve been sitting on the debut album by Distance to Zero for longer than planned. Not quite post punk, it is a DIY project that speaks to me in a way that the absolute best artists have throughout my life. It also helps that I’ve had a connection to band founder over the last few years.

SJ Collier first connected with me to discuss an act on his Stereokill Recordings label. The Cornelius Crane were an amazing American influenced band and I heavily promoted them at the time (I still love them). From there I worked Mr. Collier and discovered the various bands on his label’s roster. I took particular notice of SupaJamma featuring Martin ‘Sugar’ Merchant from Audioweb on vocals. I loved the instrumental work that SJ Collier did on the various releases. Anyway, he’s been promising a new project for a while now and I’ve been listening to the songs on repeat for weeks. Unfortunately, the best laid plans can go awry, and I found myself dealing with real life issues. 2020, as they say, will be memorable for all the wrong reasons. Or at least, that’s what I say. And yet, the soundtrack played on as we exchanges messages about the state of the world and the randomness of life. And thankfully, the music more than lives up to the kindness shown by Mr. Collier.

First things first – SJ Collier has deep roots in the Manchester, England music scene. Yes, yes – you know The Smiths and Joy Division, both favorites of mine. But SJ has a personal connection to The Chameleons – one of my favorite bands of all time. In fact, he played on drummer John Lever’s project The Red-Sided Garter Snakes. That background and experience comes into play in a big way on Pilot Error, the debut album from Distance From Zero. The album starts off with Don’t Wrong the Rights – a slab of melodic post punk that is anthemic in nature. Layered vocals are a nice touch with memorable guitar refrains. The vocals are raw, which lends the affair a sense of immediacy. An anti-war message, the chorus is fantastic. “Don’t wrong the rights / Don’t start the fight”. Blasphemy continues in this vein, winningly so. The song builds in atmosphere as it approaches the chorus. Really off to a winning start. My favorite song on the album is Found Again. In this song, all of the elements of the band come together in perfection. Lyrically, it seems to be about love lost / love gained. Layered / shouted chorus is positively infectious. “Can you hear the sound / It’s all around / Hear my heart pound / I’m found again”. Adrian Borland would approve, of course. Guitars as opera singers towards the end, truly breathtaking. Not in My Name rides on a reggae inspired bass riff with lyrics delivering a timely message in the face of current world events. “War is blessed, why’s it blessed / With heads in the sand no one can be heard / Speak up and be strong, have your word…/ Not in my name!”. Inspiring. Shame on You has a been of a Johnny Rotten / John Lydon vibe to it – especially the solo album era (1997’s Psycho’s Path). Snotty vocals, reggae, electronic f/x – it is a busy mix and yet it works really well. The last lyric in this song can serve as a synopsis of the album’s message. “I just want a truth that’s real, a fair day’s pay, an honest deal”.

You can buy the album here. The project is SJ Collier and his partner Donna – instrumentation is divided up among them whilst the vocals are primarily by SJ. You can follow them on The Social Network here. I really love this album and highly recommend it. It is a nice addition to my collection and a soundtrack for the chaos of 2020.

One thought on “Distance From Zero – Pilot Error”