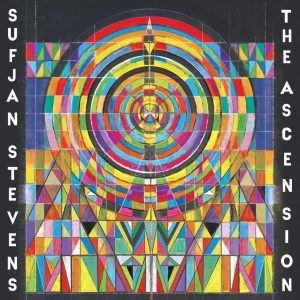 In another life, I would find myself in various US cities all across the country for short intervals. One of the pleasures I took with that was picking out the music appropriate for the locale. And so, in the summer of 2005, I found myself driving around Chicago, IL blasting Come On Feel the Illinoise by Sufjan Stevens. For a geek like me, this was absolutely thrilling. The final album in his States albums, it spoke to me on a visceral level. In fact, I’ve long gravitated towards the acoustic based albums by Sufjan Stevens while admiring / not loving his more experimental albums. In fact, 2015’s Carrie and Lowell was easily my favorite release of his – acoustic, personal, masterful. How would he ever follow that album up?

Discounting his collaboration albums, 2020’s The Ascension is the 1st true full-length solo follow up. And it does a neat trick – it rewrites the rules a bit. It sounds NOTHING like his acoustic based albums. But it doesn’t really sound like his experimental albums either. We have an album that shares a remarkable amount of characteristics with Kanye West’s 808 & Heartbreak. Say what you will about Kanye, but that album is a masterpiece in my opinion. And here we have Sufjan Stevens employing his own electronic soundscapes, imbued with a sadness that is disarming. This is an album length anthem for 2020. I would dub it “downbeat anti-gospel music”. And it is (almost) perfection.

The singles released from the album thus far have done a nice job of introducing the world to the new sound of Sufjan Stevens. Video Game comes off as deceptively simple – a routine beat with synth flourishes. Yet it keeps you coming you back for more. Sufjan Stevens is a devout believer, yet those opening lines express doubt while also calling to mind Depeche Mode. “I don’t want to be your personal Jesus / I don’t want to live inside that flame / In a way I want to be my own believer / I don’t wanna play your video game”. Heavy stuff. Sugar is my favorite of the singles. The album version features a lengthy introduction filled with various sound f/x. Sufjan enters the mix around the 3-minute mark, almost flippantly. “Is someone gonna cut me some slack / Now that it’s a quarter to ten / Come on baby give me some sugar”. The song contrasts downtempo verses with an R&B infused chorus. It is truly infectious. America is the only one of the singles without a video to go along with it. It was written during the Carrie and Lowell sessions but would have sounded really out of place on that album. Sufjan calls it “a protest against the sickness of American culture”. It contrasts the laments with Biblical imagery, fitting for where America is in 2020. This is pure minimalism with the refrain “Don’t do to me what you did to America” repeating itself as a mantra. This is dark stuff.

Going beyond the singles, the album offers up a wealth of strong tracks. The album opens with Make Me An Offer I Cannot Refuse – skittering beats and hymnal sounds taking over my headphones. It feels almost symphonic as the music ebbs and flows. Is Sufjan questioning his faith? “Show me the grace of a natural king / Lord, I need deliverance / Make me an offer I cannot refuse”. It’s our introduction to the album and it is breathtaking. Run Away With Me is mournful musically and vocally. We are listening to minimal electronics with few embellishments. It is haunting and emotional. The production gives every piece room to breathe, making sure the listener is experiencing the narrator’s anguish. Tell Me You Love Me is a slow burn, Sufjan’s lost his faith but wants to make sure his partner’s love is true. Landslide is techno beats and robotic vocals – and it is stunning. Death Star brings in unexpected references to Star Wars with musical backing that wouldn’t sound out of place on an early Depeche Mode record. It’s wonderful. The Ascension is slotted towards the end of the album and serves as basis for the album title. It is the song heaviest in religious imagery and perhaps not coincidentally, the most evocative. An electronic ballad of faith and doubt, in equal measures. It is my favorite song on the album. “And now it frightens me, the thought against my chest / To think I was asking for a reason explaining why everything’s a total mess / And now it frightens me, the dreams that I possess / To think I was acting like a believer when I just angry and depressed / And to everything there is no meaning a season of pain and hopelessness / I shouldn’t have looked for revelation, I should have resigned myself to this”. It is truly an inspiring, haunting song that speaks to what doubt feels like.

The album is out now, and I highly recommend it. It isn’t as immediate as some of the other albums by Sufjan Stevens, but the listener is rewarded by repeated spins.