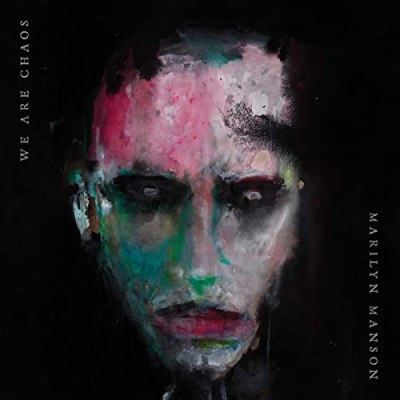 In the summer of 2019, I attended an in store performance at a famous record store in West Seattle. The artist was someone who had deep roots in the early 80’s Seattle punk scene but eventually made his name with a notorious hard rock band out of Los Angeles, CA. This artist once again was living in West Seattle and had become sort of a prodigal son when he wasn’t on the road reunited with the band who had made him famous. It was cool to meet Duff McKagan. The show had a country vibe with a few Guns N Roses classics in the setlist. But one of my takeaways from that evening was how cool his collaborator was. Shooter Jennings was like talking to an old friend. Personable, nice, and in pre-COVID days, willing to shake my hand. I also forgot to get a picture with Shooter – a big regret. Shooter Jennings – you may have heard – is a performer, co-writer, and producer on Marilyn Manson’s new album, We Are Chaos.

Straight up – I’m not a huge Marilyn Manson fan. The early albums felt like unfocused rage to me. A brief dalliance with a Bowie allegiance caught my ears – indeed, I still listen to 1998’s Mechanical Animals 22 years later. After that? It is very hit or miss for me. My interest was triggered in recent years by his cover of God’s Gonna Cut You Down – a posthumous song released by Johnny Cash. The new Marilyn Manson songs seemed seeped in country and blues, yet still had that old rage. When I heard Shooter Jennings was involved with the new album, I knew I had to have a copy. It doesn’t disappoint – this is easily my favorite Marilyn Manson album. Your mileage may vary, to be sure. But what I like about it is that it takes just about every sound he has explored over the last 25+ years and blends it into an intoxicating brew. Industrial, new wave, country, blues – there is even some crooning on this record.

Red Black and Blue starts off the record ominously enough, all electronic f/x and spoken words that sound filtered through Hell. “I can stick a needle in the horror and fix your blindness”. OK, Marilyn – sounds good. And yet – once the song kicks off proper, you’ll have the sense that this is something special. Barked vocals, Wire influenced chugga chugga guitar lines – this is middle aged rage. The title track sounds tame by comparison. Acoustic introduction, honest to God singing, and a sense of longing that is profoundly affecting. It is also the 1st single. It builds to an anthemic chorus: “We are sick, fucked up and complicated / We are chaos, we can’t be cured”. It should go down as one of Marilyn Manson’s finest singles. Don’t Chase the Dead is the 3rd winning track in a row to open the album. This sounds like a demented song from the film Grease. When I was listening to it, I imagined the doo-wop vibes as being sung by Marilyn Manson in the John Travolta role. Maybe that’s insane – but this is glorious. 50’s vibes meets 90’s vibes meets 80’s new wave. Shooter Jennings’ production allows each piece of the song to have room to breathe. God, I love this song. It leads right into Paint You With My Love – another 50’s styled ballad. In fact, it can be viewed as a coda to Don’t Chase the Dead. In contrast, Half-Way & One Step Forward is pure new wave. Giorgio Moroder styled electronics with atmosphere and vocals that wouldn’t sound out of place on a Depeche Mode album. The middle three songs of the album regress into aggression & rage – but I still enjoy it. In the context of the album, it works really well. An older, wiser Marilyn Manson raging against the machine is preferable to the howls into the wind of yesteryear. But I’ll tell you – the last two songs – this is the stuff of legends. Solve Coagula has this bluesy guitar refrain that also serves a melodic counterpoint. This is Manson at his most confessional “I’m not special, I’m just broken / And I don’t want to be fixed”. Screaming, singing, crooning – he squeezes every ounce of emotion out of these words. And it works. Broken Needle closes the album with a ballad of epic proportions. The music swells as Marilyn Manson intones “Are you alright / ‘cause I’m not OK / All of these lies / Are not worth fighting for”. The song builds and builds until the listener is emotionally exhausted. This is Marilyn Manson in 2020. This is perfection.

Shooter Jennings and Marilyn Manson are a match made in heaven. I hope this is a partnership that endures. The record is out now, everywhere.