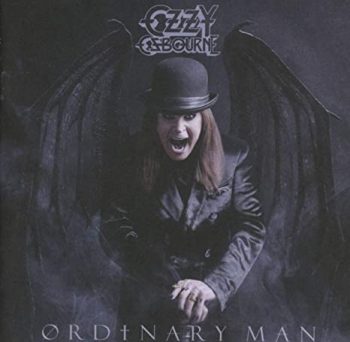 Ozzy Osbourne returned in February with his first solo album in a decade and first batch of songs since the Black Sabbath tour document The End. That EP had a few studio leftovers from 2013’s comeback album 13 and a few live tracks from the tour. It didn’t feel like the last we’d hear from Ozzy at the time and I’m glad the Prince of Darkness has blessed us with Ordinary Man – his strongest solo album in years.

The album features Chad Smith of the Red Hot Chili Peppers on drums and Duff McKagan of Guns ‘N Roses on bass on just about every song. Guitar duties are handled mostly by producer Andrew Watt, though Slash of GNR makes two appearances as does Tom Morello of Rage Against the Machine. Hell, even Elton fucking John is on this album – a dizzying menagerie of guest appearances. Not one of these guests takes anything away from Ozzy Osbourne, rather, they enhance his songs spectacularly. Borne out of frustration, illness, and downtime, the album finds Ozzy at his most playful AND his most reflective. I had tickets to his Seattle area show that was to be held almost 2 years ago – it was rescheduled and ultimately cancelled due to Ozzy’s health issues. Is this the last we’ll hear of Ozzy Osbourne? I am not sure, but lyrically, this tugs at the heartstrings.

I’ll break down a few album highlights. Generally, the slow songs immediately appealed to me whilst the harder tunes took a few spins to sink into my consciousness. Straight to Hell was an early single and kicks off the album. It is in the classic pop / speed metal vein that Ozzy mastered in the 80’s – without the guitar histrionics. If there is one qualm I have about this album it is that Zakk Wylde is sorely missed. No matter, this song rocks. Pretend Ozzy is a demon when he sings “We’re going to straight to hell tonight!” and not an ailing gentleman in his 70’s. Ordinary Man is perhaps the best ballad of Ozzy’s career and features Elton John on vocals and Slash on guitar. It feels like a goodbye and his vocals are particularly emotive. Lyrically, it could come from Elton or Ozzy’s perspective: “Yes, I’ve been a bad guy / Been higher than the blue sky / And the truth is I don’t wanna die an ordinary man / I’ve made grown men cry / Don’t know why I’m still alive / Yes, the truth is I don’t wanna die an ordinary man”. A vintage guitar solo from Slash and a tear inducing video (embedded below). It is magical. Under the Graveyard was another early single and again features lyrics that indicate a goodbye of sorts. It is a mid-tempo song that grows on the listener after repeated plays. On the lighter side of the album, Eat Me and Scary Little Green Men feature exceptional, grunge inspired bass work from Duff McKagan. There seems to be a slight Roky Erickson inspiration on these songs – out there lyrics that feature demented visions tied together in demonic science fiction. Incredible, in other words. Holy Tonight sounds like a Black Sabbath / solo career hybrid and is another slower highlight for me. This feels like The Beatles in some ways, which is only a good thing in my opinion. Again, is this goodbye? It sure feels like it. “What will I think of when I speak my final words? / What will it feel like? And I wonder if it hurts / I’ve just got a mile and I can taste the kiss of death / What will I think of when I take my final breath?”

Ordinary Man is a masterful late period Ozzy Osbourne album. I have minor quibbles relating to the guitar work (Where’s Zakk Wylde?) and the Post Malone songs tacked on at the end of the album (they work, they just don’t flow well). But ultimately, this is a strong album that you’ll return to time and time again. Recommended.

Verdict: The Prince of Darkness Returns