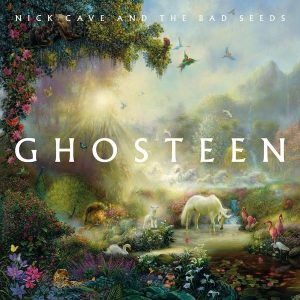 In early 2016, I began experienced an unexpected death of a love one. Though I didn’t know it at the time, it began a streak of sorts. Each year since then, I’ve lost someone who has played an important role in my life. As the losses mounted up, I’ve returned to Nick Cave’s The Skeleton Tree time and time again. Though it was written prior to the death of his 15 year old son Arthur, it was recorded after. Vocally, it haunts me to this day. The weight behind the words, well, it was a fitting soundtrack as I said goodbye to someone new each year. It resonates with me as much as the day I first heard it. Nick Cave’s new album, Ghosteen, is his first record written and recorded since the loss of his son. And once again, I’ve lost someone dear to me. At its best, this record speaks to me in a way that few records ever have.  It takes Nick Cave & the Bad Seeds into areas previously unexplored by the band. The word “Ghosteen” is described as combination of the word “ghost” and the Irish suffix “in”, which translates to “little”. On the surface you can also split the title into Ghost Teen – and I think that speaks volumes about the content contained within. The album cover is the painting The Breath of Life by Tom duBois. It reminds me of a Bible Tract – or at least, a spiritual view of what the afterlife may be. The music is sparse and orchestral – even sparser than The Skeleton Tree. This may be an issue for some long time Nick Cave fans – for a band with two drummers, there are almost no drums on this album at all. I’d even give weight to those who say it sounds like a Nick Cave solo album, not a Bad Seeds record. As for me, certain songs instantly spoke to me. Others have taken time to sink in. Lyrically & musically, this is a deeply emotional record, with grief as the cornerstone.

Spinning Song opens the record with a story that seems to be about Elvis Presley – “The king was first a young prince / the prince was the best / with black jelly hair / He crashed onto a stage in Vegas”. The music is mournful, loops swirling around Nick Cave as his vocal delivery is layered in gravitas. The story & music builds, until it isn’t clear who Nick Cave is addressing. Though, maybe it is. “And I love you / Peace will come…in time”. Bright Horses has a lighter tone, anchored by a repetitive piano refrain. And yet, lyrically, the song is facing questions of faith head on. After breaking down reasons not to believe “And everyone is hidden and everyone is cruel / And there is no shortage of tyrants and no shortage of fools” the song flips that script in the last third, as hope enters Cave’s voice “it don’t mean we can’t believe / in something and any way / my baby’s coming back to me”. It is a deeply touching moment. Waiting for You is the sound of a parent struck by grief after the unthinkable has taken place. Sorrow pours out of Cave’s voice. He is in full sad crooner mode during the chorus, which is just the song title sung with emotion. The lyrics leading up the chorus are memorable – poetic in how they convey sadness. “A Jesus freak on the street / Says He is returning / Well, sometimes a little bit of faith / Can go a long, long way / Your soul is my anchor / I never asked to be freed / Well, sleep now, sleep now / Take as long as you need / Cause I’m just waiting for you”. Sun Forest feels like funeral music, and I mean that in the best possible way. There are so many lines that speak to me in this song, as the chorus of sadness builds around me, an orchestra of grief. “…the future rolls in, like a wave, like a wave, and the past with its savage undertow, lets go.”  Ghosteen Speaks and Ghosteen are similar in tone, with comforting lyrics and music that is emotionally resonant. They are tone poems that are deeply impactful. “I am beside you / Look for me” and later “Love’s like that you know / It’s like a tidal flow / And the past with its fierce undertow / Won’t ever let us go”.  I must’ve played the final song on the album, Hollywood, two dozen times or so already. It is my favorite song on the album and speaks to me in a way that very few songs have in my life. It opens with a feeling of dread – dark orchestration and synthesizers before Nick Cave’s disembodied voice tells the story of going along the Pacific Coast on his way to Malibu. Leaving the past behind. “Darling your dreams were your greatest part / I carry them with me in my heart”.  It is truly disconcerting to feel the darkness building and Nick Cave singing “I’m just waiting now for my time to come”. The song builds and segues into another section. “It’s a long way to find peace of mind, peace of mind”. The whole album has been building to this moment. A parable of a mustard seed – a hope to save Kisa’s baby. But it doesn’t work out, because she could only get a mustard seed from a house where no one had died. But in every house someone had died. And the last words of the album “Everybody’s losing someone / It’s a long way to find peace of mind, peace of mind / And I’m just waiting now for my time to come / And I’m just waiting now for peace to come”.

In short, this is a breathtaking album that is a testament to the power of grief and the thoughts that transpire in it’s aftermath. It is a tribute and plea to his song Arthur, who passed away at the tender age of 15. It is a work of art that I’ll return to time and time again.