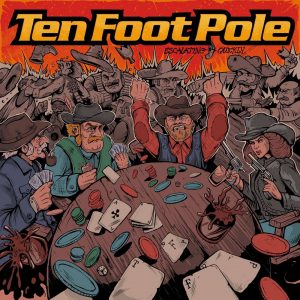 Southern California’s Ten Foot Pole are stalwarts of the scene’s pop punk sound and scene. The band began as Scared Straight in the early 80’s and were associated with the Nardcore movement which helped them make a name for themselves. The 90’s saw them working as labelmates with The Offspring, Rancid, and NOFX on the Epitaph label. Through the years the band has seen quite a bit of members come and go, with the one constant being Dennis Jagard on guitars and vocals. Escalating Quickly is the band’s 1st full length containing all original material in 15 years and along with Dennis Jagard, features Scott Hallquist on guitars & vocals, “Lil” Joe Raposo on bass guitar, and Sean Sellers on drums. It is a stunning return from these industry vets.

The album marks a conscious change in sound. No longer married to the punk sounds so prevalent in the scene, producer Ryan Greene helps bring in a streamlined pop sound with additional sound f/x that makes for an invigorating listen. It may have some of the old school punks scratching their heads, but I love the sound of this new direction. Don’t worry, there’s still plenty of attitude on display throughout the proceedings.

Everything Dies opens the album and is also the single. It navigates familiar ground with a call and response chorus that’ll rope in old and new listeners alike. Oh, except there’s an acoustic guitar breakdown and a Phil Spector type wall of sound. Don’t Be a Dick is a great motto on how to live life. It’s also the 2nd song on this record and leans heavy on the pop side, processed vocals, and melodies galore. “But it all boils down to kindness, or at least not being a meanie / And if you don’t understand that you might be a giant weenie! / Don’t be a dick!” Forever Road is my favorite song on the record – the guitar licks sound like something straight out of a mid-80’s metal song, which is awesome. It is political, angry, and instantly memorable. “We are resisters and seekers of truth / Trying to break free from the myths of our youth”. I love how that lyric ties everything together. It isn’t a typical punk sounding song, and all the better for it. I Hate the Night is a mostly acoustic shuffle that is a late album highlight. Goodbye Sunny Days ends the album on a downer acoustic vibe – perfect. It is a song that bears repeated spins, it is a layered, nuanced listen. “Coffee won’t do anything / I taste the demons on the horizon” was a lyric that caught my attention. A ballad for 2019 and these strange times.

You can pick up the album here and follow the band here.  Escalating Quickly is one of the best releases of 2019. Welcome back.