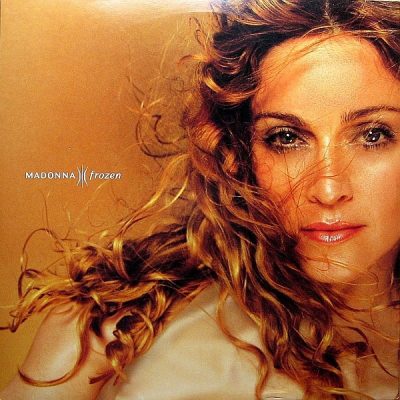 I’ve had this song on my mind over the last week or so – the Puget Sound region has experienced Winter conditions that are very unusual for the region – snow, ice, and well…more snow and ice. It certainly has led to many nights by the fire trying to warm up. Frozen was released as a single in February, 1998 by Madonna – hard to believe, but this single is old enough to drink. It represented a change in direction for Madonna – spiritual yearning, electronica beats, and an overall more mature presentation to the world (one that sadly would not last). The song was lifted from the Ray of Light album with a peak chart position of #2 in the US and #1 in the UK. It also was accused of plagiarism in Belgium, with similarities noted to Ma vie fout le camp by Salvatore Acquaviva – in fact, sales of the single were banned for an eight year period in Belgium, as the case went through the courts (no plagiarism was found). I have fond memories of playing this single (and to a lesser extent, it’s parent album) and noting the strange new direction Madonna’s muse had taken her. Vocally it is vulnerable while lyrically conveying strength as the orchestrations swell at the emotional apex. Perfection.