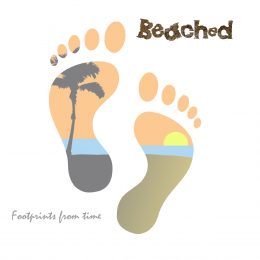 One of my favorite indie acts over the last few years has been England’s Curry Quiche. They found that sweet spot blending hooks with social commentary – not unlike The Clash. Lyrically, they cut to the core of the issue while making the listener sing along – it doesn’t get better than that. After 2017’s Behind the Machine I was dismayed to hear that the band had disbanded. Fortunately, 2 of the members regrouped as Beached. The intent with Beached is to go down a more commercial, more electronic path. The theme of their debut album, Footprints in Time, is time & relationships. How does it compare to Curry Quiche? Very well, as it turns out.

The album starts out with a bit of jangle pop in the form of 13th July. It’s breezy, but hardly inconsequential. It does a great job of setting the tone for the album. What Could Have Been has a reggae / Space vibe that I love. Lyrically, it seems to describe an early midlife crisis. “Looking back at pictures / of wasted…time / Thinking of why I had no real ambition”. Embracing The Space You Left Behind is my favorite song on the album. A bit of the ivory keys here, emotive vocals, impassioned playing. The refrain “nothing lasts forever” is haunting in its delivery. Digital Love covers some of the ground that the latest Gruff Rhys album covered – love in the age of digital garbage (also something explored in the upcoming Mudhoney album). It is a smart choice for the single – a bouncy bass line, killer organ riff, and direct lyricism. “I’m a reader of Lonely Planet through Digital Love”. Ouch. Wherever The Bus Takes Me ends the album on a high note, grooving on a bass riff that’ll stay lodged in your brain. What comes next for Beached? I’m not sure, but I’m looking forward to it.

You can pick up the album here. And follow the band on the social network. A great release, one of the best of 2018 so far.