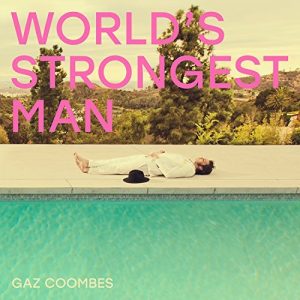 Gaz Coombes is perhaps an unlikely solo star. At the height of Britpop in the mid 90’s, he fronted Supergrass – a band lumped in with the scene but who were more punk inspired, more fun, and yet – had a deep sense of melancholy as their career progressed. My personal favorite was the underrated self titled third album, with my favorite Supergrass song What Went Wrong (In Your Head). The songs struck a balance between sadness and euphoria, something that will endlessly appeal to me. 3 albums more would follow before the band split in 2010 citing the usual musical differences. As a solo artist, Coombes has deepened his sound while retaining some of the elements that we loved about him in Supergrass. You just have to dig a little deeper to find that playfulness. Middle age is a bitch. World’s Strongest Man is his 3rd album and it just may be his finest album yet.

World’s Strongest Man continues the move away from the power pop punk of Supergrass. In its stead we have deeply moving ballads, motorik inspired rhythms, and lyrics that speak to the over 30 crowd. But before the album gets into all of that, the title track kicks it off – a jokey, glam inspired workout that recalls Supergrass. So everything I said was true except for this song, basically. A bit of fake machismo for a laugh “I’ll play the game for you / Only if I give a fuck”.  Deep Pockets hints at the true feel of the album – that pulsating beat, white noise guitar flourishes, and jaded lyricism “A lot of ways I could start making little changes But I’m too stoned in the back seat again, I couldn’t stop it / Then the panic soon surrounds me like deep water / So I give myself to the outside”. Shit (I’ve Done It Again) is a perfect mournful ballad. That feeling of everything going right before going off the rails. The tune build and builds to an emotional catharsis. “Shit, I’ve done it again / I got so far then fucked it up, hit the wall / I couldn’t help myself”. Going against conventionality, Gaz follows up that ballad with another one. And it’s a stunner. Slow Motion Life has some of the most emotional singing yet from Mr. Coombes. Piano, strings, orchestration, emotions – its all on display here. The Oaks has an almost Portishead like beat and a bouncy bass line that is infectious. We are about as far away from Supergrass as can be with this tune. Another tune that builds and builds. We start out with emotionally detaches vocals before the voices are layered on top of each other, pleading “Another one to shake you up / Another one so hard to find / ‘Cause when it all hits you / When you’ve climbed that hill / When it all gets real / All I want is you”. Weird Dreams closes the album on a high note – on an album full of them. Half ballad, half spoke poetry, with military like beats that somewhat remind me of Mono’s Life in Mono (from the underrated film Great Expectations). It all adds up to an emotional rollercoaster. I can’t wait to see what Gaz comes up with next.

The album is out now and comes highly recommended. It’s my favorite thing that Gaz Coombes has done since that 3rd Supergrass album.

Verdict: Gaz is in another world