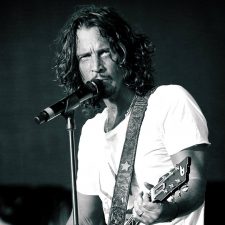 The morning of May 18th, 2017 is not one that I’ll forget in my lifetime. I woke up to a message from a close friend indicating that Chris Cornell had passed away at some point early in the morning. Puzzled, it took me a few times to understand what had happened. Out of the blue news about a musician who had long seemed to settle into his lifestyle, it shook me to the core. News and articles seemed light on details at first – at first I thought it had been a hoax – but reality soon sank in. Chris Cornell – Seattle’s son – had passed away at the age of 52 by his own hand.

To call me the biggest Chris Cornell fan would be a mistake, though in recent years I’ve come to appreciate his gifts. In fact I’ll be honest – when I was in high school MTV used to play Soundgarden’s Outshined video relentlessly and it grated on me. All the points that I love about Soundgarden NOW at the time seemed irritants – howling vocals, sludgy metal guitars, not quite Nirvana (I think I had that actual thought all those years ago). I did like Hunger Strike by Temple of the Dog quite a bit – though I approached it from the Pearl Jam angle. It is never too late to admit when you make a mistake w/ your musical taste – take it from me. A few albums and hit singles later, Soundgarden broke up. And I had already moved on. Or so I thought.

The late 90’s saw a resurgence in Johnny Cash’s popularity fueled by his collaborative albums with Rick Rubin. Seemingly an unlikely partnership, it proved to be highly successful and brought The Man in Black to a wider, younger audience. Buried on one of those records was a cover of Soundgarden’s Rusty Cage. The original track was an almost heavy metal approximation of grunge – pure Seattle through and through. Johnny Cash took that base and created a menacing (mostly) acoustic track that builds and builds (backed by Tom Petty & friends, no less). It made me reach back to peak period Soundgarden and develop an appreciation for Chris Cornell’s dark vision (along with the rest of the band).

Just a few years later, Rage Against the Machine broke up and were actively recruiting for a new singer. Chris Cornell’s name was being mentioned and I had a hard time envisioning how he would fit in with that choppy, metallic sound. Perfectly, as it turns out. From 2002 to 2006 the band put out 3 very strong albums that took the best bits of Soundgarden and mixed them with the musical stylings of Rage. I felt like the critics missed the boat with their sometimes harsh reviews of the albums – for me they are just about perfect. Lyrically, Cornell was yearning yet seemed somewhat settled as he eased into the next phase of life. Not quite a far cry from some of Soundgarden’s lyrics, but it was forging a new path in my opinion. And almost as soon as it had begun, the band was over.

Over the next decade, Cornell rebooted his solo career, reformed Soundgarden, reformed Temple of the Dog, took Layne Staley’s place in a Mad Season reunion, and made peace with the guys in Audioslave (even leading to a reunion in January 2017). In 2013 I attended the Sub Pop festival in Seattle and fell in love with Mudhoney – which lead me to delve deep into Green River’s discography. And wouldn’t you know, Soundgarden covered Green River’s Swallow My Pride on their 1988 EP Fopp. Just last year I had the opportunity to see Temple of the Dog in Seattle with a close friend – we somehow managed to secure two tickets to a show that sold out in less than a minute. Our seats were in the very last row in The Paramount Theater. Temple of the Dog (Chris Cornell + Pearl Jam – Eddie Vedder) played a 25 song set that drew from their self titled album, Mother Love Bone songs, Mad Season songs, and several covers. Chris Cornell told stories about Mother Love Bone singer Andrew Wood, entertained us, and really interacted with the audience on a visceral level. When he played an acoustic version of Man of Golden Words it felt like the pain from Wood’s death was fresh, though it had been 25+ years. It was a beautiful, impactful moment.

If I had to direct someone to listen to a few songs to understand the talent of Chris Cornell – bearing in mind today’s short attention spans – I’d direct them to listen to these songs:

I realize that song list tends to skip over some of the more popular songs Chris Cornell was involved with, but it gives a nice overview of his career. Over the last week or so I’ve watched Seattle come together to celebrate the life & music of Chris Cornell. It is a beautiful thing, though shrouded in sadness. We will probably never know what happened – sometimes those moments of hopelessness can be overwhelming. Sometimes they are made even worse due to the medication that is supposed to help us. What I DO know is that Chris Cornell will never be forgotten. His impact on Seattle and the world in general is immeasurable. He took chances and pushed himself to artistic highs repeatedly. And remember – if you find yourself feeling depressed, suicidal, or anxious – you are loved. Reach out to a friend. Message someone. Call someone. Or call the suicide prevention hotline – 1-800-273-8255.

Over this Memorial Day weekend, I will be paying a visit to the Sound Garden park in Seattle to pay my respects to the great Chris Cornell. Seattle’s son. May he rest in peace. I leave you with his cover of Prince’s Nothing Compares 2 U.