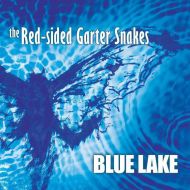 Less than 18 months after the debut album Endless Sea from The Red-Sided Garter Snakes comes the follow-up Blue Lake. What began as John Lever’s project designed as a catharsis in the wake of his split from Chameleonsvox has become something special in its own right – something reigniting the magic found on those 4 studio albums from The Chameleons. Anger is an energy as Johnny Rotten once said – but what you do with that energy is what counts to me. The Red-Sided Garter Snakes use that energy wisely. Musically, we are drawn into post-punk, shoegaze, britpop, and psychedelic worlds. Lyrically, the songs are imbued with a sense of poetic mysticism. It’d be easy for me to say that it is a group worth exploring just because John Lever was the drummer for the legendary Manchester band The Chameleons – but the truth is that the whole is greater than the sum of its parts (to quote the original hipster, Aristotle).

Blue Lake’s creation was not without its challenges. Dave Fielding dropped out of the project early on, leaving me wondering how the guitar parts would sound (Fielding was responsible – along with Reg Smithies – for those spine tingling riffs w/ The Chameleons). I needn’t have worried so – Lever has gathered a who’s who of musicians tied to the Manchester scene, creating a memorable sound in the process. In fact – on a few tracks Andy Clegg and Andy Whitaker join the proceedings, making it a de facto reunion of Music for Aborigines and a 3/4 reunion of The Sun and the Moon (it is safe to say that Mark Burgess was not invited to the album sessions). The album expands on the debut’s offerings, acoustic guitars giving way to walls of noise and instrumentals jutting up against perfect pop songs. What I love about this album is that it shows just how talented John Lever really is – you might have loved him as a drummer already, but his new project demands that he be taken seriously as a songwriter and curator of pure talent. Blue Lake is a different album from Endless Sea – but is in every way its equal. An invigorating sophomore album that deserves a wider audience.

Endless Sea opens the album – an instrumental that lends an atmosphere of doom and foreboding. Eerie riffs and tribal, minimal beats. Say, isn’t this the title track from the 1st record? I suppose so. Those jesters. Sharing Your Skin is an uptempo number that lends some muscle to the post-punk framework. Lever’s work on the skins is outstanding (that goes without saying), but this stands out as a group effort. Paul Denheyer’s vocals fit the music well, giving it a Mansun-ish feel (the great UK band, not the silly US fake goth rocker). She Sells turns the vox over to Greg Matthews and the music takes a turn turns JJ72 and Puressence territory – post-punk w/ melodies. Lyrically, it kills “I walk the wire of feelings from damaged to unstable” – wish I wrote that. Blue Lake (instrumental) has a slightly less menacing atmosphere than the opener – killer guitar riffs with a memorable piano line that comes to the fore as the song closes. The Black Horse was one of the 1st songs I heard from this album and still pulls at my heartstrings. The mix is entrancing – acoustic guitars in my right headphone as cacophony swirls around my head. “In spite of everything, I’ve gone & lost control”. Ragbone Man is a new version of a song from Music for Aborigines. Andy Whitaker on vocals – it is the darkest sounding song on the album. Post-punk with gothic undertones, it is fitting soundtrack for a Bela Legosi film. “Our past is your future” – the lyrics on this album are simply amazing. The Village is a hit in an alternate universe (I say that so often, I wish I lived in that alternate universe. Maybe I do.). The sound reminds me of New Order and The Cure in the early 80’s. The sound builds and builds until it overtakes you. Truly inspiring. An ode to love gone dead or a once thriving town gone dead – it is in the ear of the listener. One line that gave me chills “I don’t know where it started, but I know it’s gonna end in silence”. John ‘The Turncoat’ closes the album with an instrumental featuring some impassioned drumming from Mr. Lever, our Master of Ceremonies. It takes everything full circle and is an inspired way to end the album.

Once again, John Lever & company have left me with an album that truly leaves me inspired. I can’t wait to see what comes next. You can purchase the album / follow the band here and keep an eye on upcoming events in the Manchester, England area. The legacy of The Chameleons carries on with The Red-Sided Garter Snakes.

For Fans of: The Chameleons, Slowdive, The Sound, Cowboy Junkies, Mansun, Lush

One thought on “The Red-Sided Garter Snakes – Blue Lake”