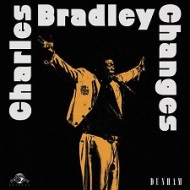 The upcoming final tour by Black Sabbath (I’m attending the February 2016 show in Tacoma, WA) had me playing all the Ozzy albums and creating playlists of my favorite songs. I kept coming back to the song Changes from 1972’s Vol. 4. A sad ballad inspired by (former) drummer Bill Ward’s divorce, it stands out from the doom metal the band is known for. As great as the original is, the song was covered in 2013 by soul singer Charles Bradley to stunning effect. The original featured a sparse production which helped highlight the sad nature of the lyrics. Charles Bradley takes that and builds on it – he adds a deep rhythm section to the tune, making it a perfect transition to a soul stunner. Bradley sings his heart out – in fact, if a listener heard this version 1st they probably wouldn’t believe you if you told them Ozzy Osbourne had sung this originally, 44 years ago. When talking about heartbreak, the direct approach has always spoken to me – and this song’s lyrics take the cake: “I feel unhappy / I feel so sad / I lost the best friend / That I ever had / …I’m going through changes”

One thought on “Charles Bradley – Changes”