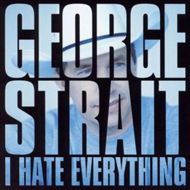 Mainstream country music isn’t a genre that I know in-depth – the only exception being Johnny Cash. And I really didn’t come on board with The Man in Black until his Rick Rubin years, which appealed to geeky hipsters everywhere. Anyway, years ago I was driving home from Snoqualmie Falls (you know them from the intro of Twin Peaks) and happened to be scanning the radio stations for something to listen to. The scanning landed on the country music station which just so happened to be playing I Hate Everything by George Strait. Now, I’ll be honest – I hadn’t heard anything from George Strait at that point and to this day I am fairly unfamiliar with his body of work. At any rate, I Hate Everything is a perfect country song written by Gary Harrison and Keith Stegall. It was released as a single in July of 2004 as the lead single from Strait’s 50 Number Ones compilation. The song features Strait’s emotive vocals, mournful fiddle accompaniment, and perfect lyrics. The lyrics embody a story of a man drinking at a bar who can’t get over his wife leaving him for another man. The song has a twist ending in a way as the narrator relating the story decides to go home to work out everything with his spouse. It’s just about a perfect song, and you’ll be singing along (and maybe smirking at the repetition of the song’s title). “I hate my job, I hate my life and if it weren’t for my two kids I’d hate my ex-wife / I know I should move on and try to start again / But I just can’t get over her leaving me for him / Then he shook his head and looked down at his ring and said I hate everything”. The song hit #1 on the country charts and #35 on the Billboard Hot 100.