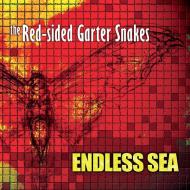 The Chameleons out of Manchester, UK have long been 1 of my favorite post punk groups (that strange music created in the aftermath of the 1st wave of punk). Kind of a loaded statement, but I’ll make myself clear – when I’m talking about The Chameleons I am including all the side projects and whatever I could get my hands on over the last 20 years. I managed to see the original band in Seattle in the summer of 2002 which was easily one of the best shows I’ve ever been to. Sadly, the reformed band didn’t last and the members went their separate ways. No new material from a member of The Chameleons was released until late 2013 when singer Mark Burgess released an EP under the Chameleonsvox moniker. Now we have a full length album by The Red-Sided Garter Snakes featuring John Lever and Dave Fielding from The Chameleons.

In the wake of splitting from Chameleonsvox, John Lever gathered a notable group of musicians from the Manchester area to begin The Red-Sided Garter Snakes project. Joining Lever on this project are Andy Clegg (The Sun & the Moon), Dave Fielding (The Chameleons), Stephen Wilson (The Cornelius Crane), Simon Collier (SupaJamma), James Mudriczki (Puressence), Mary Joanna Coogan (yes, she is related), and Greg Matthews (Bauer). An album featuring different vocalists & musicians usually would scare me just a bit, but I believed the band was working on something special. Thankfully, I was right. This is a masterful album, one of my favorite releases of 2015. In The Chameleons universe, it slots in nicely with the later recordings by The Reegs and the atmospheric songs on the Why Call It Anything? album by The Chameleons (I always thought that was underrated, I love it).

Truthfully, I could talk about each and every song on this album – it really is an impressive work of art. Opener Shape Your Spine features Stephen Wilson of The Cornelius Crane on vocals and its about as stunning of an opener as you could ask for. A dark vibe, eerie vocals, monster riff from Dave Fielding, perfect back beat from Mr. Lever himself – I love everything about this song. Feel Alive opens with a world music type sound before Dave Fielding’s guitar riff turns this into the best song The Chameleons never wrote. Mary Joanna Coogan handles the vocals and she gives the song an otherworldly vibe. In another age, this would be a massive hit. Post punk mixed with shoegazing? Something like that. Another word would be “perfect”. Found Again features Greg Mathews on vocals and is co-written with Simon Collier. I love the lyric “discovery is recovery”, a term that can encompass so much. The emotion of the vocals & music compliments those words in a stunning fashion. Close your eyes, absorb those guitar sounds, synths, and overall atmosphere – magic is happening here. Gallipoli features James Mudriczki of Puressence on vocals (the two songs he contributes to on this album are his first musical rumblings since the demise of Puressence). The track opens with an eerie sound clip before shifting into a fairly aggressive work out. Mudriczki sounds absolutely possessed when he sings “When I wrote that song / when I wrote that song” as the guitars & drums become increasingly abrasive. The final coda over the last minute or so left me breathless, just stunning. John’s Dream is a melodic instrumental that highlights the interplay between Dave Fielding, Stephen Wilson,  and John Lever. Vocals aren’t needed, this song creates its own universe instrumentally. Dream like, mysterious. Pistols at Dawn reminds me quite a bit of Mansun, the great Britpop / Prog rockers from the late 90’s. This song grooves and sways in a way that we’ve not heard on the previous tracks. This is a remake of a song from Lever’s Beefpig EP. Oh, and that sample? It is from Paper Tigers by The Chameleons.

I’ve had this album on repeat for the last two weeks, and if you even have a passing knowledge of The Chameleons, Joy Division, or post punk – it deserves to be in your collection as well. Johnny Rotten once said that anger is an energy – and that’s true. Embracing the moment and moving forward is also an energy (I think Mr. Rogers said that). With this album – Lever, Fielding & company have shown that the future is bright. You can buy the album digitally at all the major websites, or get a special package from the band here.

For Fans of: The Chameleons, The Sun & the Moon, Slowdive, The Reegs, Mansun, Joy Division

One thought on “The Red-Sided Garter Snakes – Endless Sea”