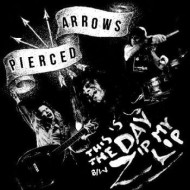 This past weekend I finally had a chance to see Pierced Arrows in Portland, OR at a co-headlining show with The Sonics. Featuring Fred & Toody Cole, it exceeded my wildest expectations. The friend I went with was familiar with The Sonics (who hasn’t heard the best version of Louie Louie ever laid to wax?), but wasn’t too familiar with Pierced Arrows. The best I could come up with was “a punk rock version of Neil Young w/ male + female vocals. Also, they are peers of Neil Young”. Something like that, and certainly doesn’t do the band justice. Singer / guitarist Fred Cole has led many bands, the most famous being Dead Moon. He also led Portland punk stalwarts The Rats, the early 70’s hard rock band Zipper, and became famous with his first band in the late 60’s – The Lollipop Shoppe / The Weeds (band name was changed from The Weeds). Pierced Arrows were formed when Dead Moon ground to a halt in 2006, after being active since 1987. Featuring Fred Cole on guitar & vocals, Toody Cole on bass & vocals, and Kelly Halliburton on drums, they are a slightly less shambolic unit than Dead Moon were and feature some of my favorite songs the Cole’s & company have laid to tape. This is the Day features emotionally bare vocals from both of the Coles as well as an infectious punk rock chorus. It encapsulates everything that makes the band so great. Starting anew, putting past mistakes to rest – lyrically, it is universally resonant. Thankfully they played it when I got to see them live, and they absolutely nailed it. It is a performance that will stay with me forever. The song can be found on the band’s 2010 record, Descending Shadows. It’s a great entry point for the wonderful world of the Coles, and you’ll find yourself collecting every one of the records these great musicians have been involved with.

2 thoughts on “Pierced Arrows – This is the Day”