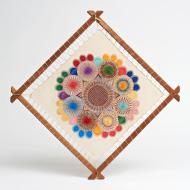 Long Beach, California’s Repeater have released a steady stream of albums and extended plays since the mid 00’s. Formed by Steve Krolikowski and Rob Wallace, who had played together in The Main Frame, Repeater took that band’s darkwave aesthetic and added in elements of post punk classicism. The band (now also including Alex Forsythe on guitar and Matt Hanief on drums) generated a steady buzz, eventually working with famed producer Ross Robinson on their 2nd full length album, We Walk From Safety. One more EP would follow in 2013 before the band in its original incarnation ground to a halt. In a way, it was a shame – the band had reached the point where noise and beauty intersected as one, they truly were firing on all cylinders. Where does a broken up band do for an encore?

If you are Steve Krolikowski, you carry on with the new songs that were being worked before the band’s breakup and assemble an entirely new band. Repeater is now made up of Steve on vox, Alex Forsythe on guitar, Chris Fudurich on bass, Charlie Woodburn on drums, and Tess Shapiro on vox & synths. The dynamic of the band has shifted as well – a lighter atmosphere is present on the new tunes, with female and male vocal interplay. The 80’s new wave / post punk vibe is still present with the band – it’s just served up with a melodic sensibility front and center, where it was lurking beneath the surface on previous efforts. It just might be the strongest thing the band has released to date.

The album opens with lead off single, Lonely. An invigorating slab of retro futurism, it recalls The Rentals or perhaps The Cars at their very finest. Layered vocals with a chugging bass line, it shows the band locking into a groove. “I’m only lonely / when you’re lonely”. The song also features a killer video, embedded at the end of this review. Innocent caught my ear because right from the start it sounds like something off of a great girl group record from the 60’s – that Phil Spector drum beat is just perfect. Soulful vocals by Krowlikowski enhance that vibe. The songs chorus reaches the melodic sweet spot, giving a the same sense of euphoria I feel when I sing along to Today by The Smashing Pumpkins. Yes, this song is that good (and if you don’t like The Smashing Pumpkins, shame on you). Forms of Evil caught my eye with its song title (did you know that evil spelled backwards is live? the more you know…). It quickly became my favorite song on the record. It grooves, slithers, and generally just kicks ass. It contrasts nicely with the sweetly sung chorus “All the evil that you see in me / Is all the evil that you see”. What a lyric! The Beatles-esqe guitar solo at about the 2 minute mark is stunning – you’d think it’d clash with the vibe of the song; instead it elevates it. We ride a wave of white noise to it’s logical conclusion. Uniform closes out the album on a high note – a mid tempo tune that evokes an air of mystery. A perfect ending to a stunning album.

You can find the new album at all major digital outlets. You can also find the band on The Social Network here. Like what you’ve heard and want to hear the older records? Check out the band’s bandcamp page.

For Fans of: Death Cab for Cutie, Weezer, The Cure, The Chameleons, Unrest

One thought on “Repeater – self titled”