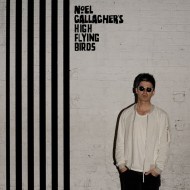 At their peak of popularity, Oasis were the biggest band…in the UK. Though they had a few hits in the US, they never broke the US market like many expected them to in the mid 90’s. Driven to success with the double-edged sword of talent & sibling rivalry, it all fizzled out in 2009 after a pre gig fight between Liam and Noel Gallagher. Critics mocked their reverent worship of The Beatles, but I admired it. Is it really so different from the latest crop of post-punk bands who worship at the altar of Joy Division? At their best, Oasis could hang with The Beatles. At their worst, they were left in the dust by The Rutles. Where does a band go when it all crashes down?

Splitting up the Gallagher brothers into two separate factions became a reality shortly after the Oasis split – Liam formed Beady Eye along with ex Oasis members Gem Archer, Andy Bell, and Chris Sharrock. Though the press wasn’t always kind to Beady Eye, I enjoyed both albums. The writing was stronger than mid period Oasis and you could hear hints of the various members earlier bands (along with Oasis you could hear Ride, The La’s, and Heavy Stereo influences). The band ground to a halt in 2014. Noel Gallagher seemed to follow his destiny and went solo – releasing a superb debut in 2011. After a scrapped collaboration record with Amorphous Androgynous, Noel’s sophomore record Chasing Yesterday was finally released in early March, 2015. How does it stack up?

Simply put, this is the finest post Oasis record put out by anyone who was associated with the band. Using Noel’s 1st record as a template, Chasing Yesterday twists and turns down many unexpected roads. Dare I say it; there is a Grateful Dead vibe on a few songs. How about the tasteful space jazz use of horns? It all comes to fruition here splendidly. If you can overlook Noel Gallagher’s knack for reusing song titles that were made famous by other artists (sorry folks, The Right Stuff is not a New Kids on the Block cover), there is nothing on this record to quibble about. The music is understandably geared towards meshing with Noel’s smokier vocal style as compared to his brother Liam’s nasal affectations, so there are no punk rock anthems here. What we do have are 10 songs that linger in the mind long after they’ve ended – a statement of the endurance Noel Gallagher has shown to still be a force to be reckoned with after all these years. Britpop for the middle-aged? Count me in, with songs this good.

Riverman borrows its title from a Nick Drake song, but that’s where the similarities end. A brooding number that finds Noel using wordplay in stunning fashion, the song segues from acoustic to slightly electrified at the 2 minute mark. What a guitar solo! The vocals are confident, though we’d expect nothing less from Noel at this point. A saxophone subtly enters the mix in the latter 1/3 of the song, becoming a full-fledged solo over the last 30 seconds. Son of the Grateful Dead and Brian Eno? Something like that. In the Heat of the Moment has the best opening line of the record – “They tell me you’ve touched the face of God / Like the sound of a rope cracking on your neck”. As the albums 1st single, it is a winner. Musically it splits the difference between sounding like Oasis and Johnny Marr’s recent solo output. The Right Stuff successfully navigates atmosphere and tension, making it one of the strongest cuts on the record. Joy Rose provides backing vocals, at times in unison with Noel’s understated delivery. A soundtrack for after the club, this is fine, fine stuff. He even manages to nick a line from Neil Young, that cheeky bastard “Are you a sleeper or a mortal soul? / Are you the devil with a heart of gold? / You and I, got the right stuff”. The Mexican has the nastiest guitar riff on the record with the vocals exhibiting the same quality. Ron Nasty would be proud, Noel. Mind you, this isn’t Britpop by way of Punk the way Oasis were at their finest. This is 70’s Rock ‘n’ Roll filtered through Noel Gallagher’s somewhat bleak outlook. I know Gallagher’s lyrics have been criticized in the past – he redeems himself throughout this record “Thought I was talking about a new religion / Waiting on the outside, lost in the fog / I was only dreaming of a revolution / Waiting for the right time, watching the clock”. Ballad of the Mighty I is the 2nd single from the record and it’s a stunner. Killer bass riff, dreamy vocals – it is an instant classic. Instrumentation is layered as are the vocals. Noel conveys his emotional uncertainty perfectly in this song, his yearning bleeds through. A bold move to end the album with such a strong song. “I followed the stars and I sailed to the sun / And held it in my fingers”.

I can’t say enough about this record – one of the 1st “must have” records of 2015. If you were a fan of Oasis, you’ll find much to love here. You don’t need to know Noel Gallagher’s 20+ year history in music to approach this record though – it stands on its own as a defiant statement of endurance.

Verdict: Dreaming of a Revolution

For Fans of: The Grateful Dead, Oasis, Ryan Adams, The Beatles, David Bowie