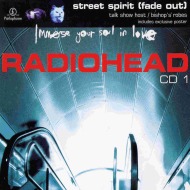 Radiohead easily could have ended up as 1 hit wonders from the 90’s based on their hit single Creep from the debut album, Pablo Honey. Angst filled lyrics, Nirvana-esque music – it was a perfect single that embodied the early to mid 90’s. The Bends – released in 1995 – was a reintroduction of sorts. A progressive element seeped into the music, with the abrasive songs balanced out by haunting melodic gems. Street Spirit was the 3rd single lifted from the record, and the 1st Top 5 UK hit for the band. For me, this song embodies everything that Radiohead would become over the next 20 years. Ghostly & emotional vocals by Thom Yorke backed by a band firing on all cylinders. The guitar refrain has to be one of the most haunting riffs Radiohead has ever created. In fact – I’ll go so far as to say that this remains my favorite Radiohead song. The lyrics present a contradiction of sorts, bleakness followed by the light. “All these things into position / All these things we’ll one day swallow whole / And fade out again and fade out again / Immerse your soul in love”. The video for the track adds to the emotional resonance of the song (embedded below). As a side note, my 2nd favorite Radiohead song is Talk Show Host – a b-side to the original single release of Street Spirit (Fade Out). It also succeeds admirably in creating its own atmospheric universe of isolation. Both tracks can be found on the deluxe reissue of The Bends.