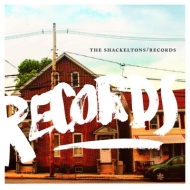 In the spring of 2007 I had the chance to go see El Perro Del Mar as part of an event put on by Seattle broadcasting legends, KEXP. The opening band was The Shackeltons – full of nervous post-punk energy and displaying a commanding stage presence. The band’s bio brought up a few curious circumstances that related to me. My Grandmom’s maiden name was Shackleton, and I may or may not be related to the famous explorer, Ernest Shackleton (depends on who is our family genealogy expert at any given time). To top it off, The Shackeltons were from Chambersburg, PA – just a couple of hours from where I grew up in the Philadelphia suburbs. The band had recently signed to Seattle’s Loveless Records and the future was bright. 6 months later the band’s new record was released and I was pleased to find that their manic stage energy had carried over to the recorded document. And then…nothing.

For the longest time, I’d always wondered what happened to The Shackeltons. Good will, positive press (even a mention in Rolling Stone)…it all seemed to disappear just as quickly as it began. Apparently after the success of the previous record, frontman Mark Redding put music on hold to spend time with his mother, who was sick with cancer. That experience imbues the new record, Records, with an emotional resonance full of authenticity. It’s been 6 years since their last record (and 7 since I saw them live in Seattle), but the band shows no signs of rust. In fact, this is the band’s strongest offering to date. After dealing with such a traumatic life experience, you’d be forgiven for thinking this might be a depressing record. Instead, the listener is treated to a stunning aural display of musicianship with words articulated in a manner that gives the whole affair a sense of levity.

I Wanna Shake Something (highlights)

The album opens with the title track, an almost instrumental track that reminded me of late, great Juno. Post rock meets Post punk, perhaps. The rhythm section is in sync, and we get some surf styled guitar riffs as a bonus. Vocals enter the mix with just about a minute left in a dream like haze. The Ache is one of the singles and is 3 minutes of call and response aggression. “I wanna shake something” is the phrase the song keeps coming back to, and it is enunciated in various states of agitation. Lights has a guitar riff that reminds me of late period Unrest and features restrained vocals “You showed me the light…these cold nights”. The End is a Mark E. Smith styled rant over barely in control No Wave, horns and all. The instrumental cacophony reaches its apex around the 2:30 mark when Mark Redding sings “We’ve all seen the birds / We’ve seen the birds all fly” and the music follows his lead towards a crescendo of noise. California sounds like the dark side of The Beach Boys. “I wish they all could dream in California”. The album closes on a touching note, Mark Redding’s mom singing My Bonnie Lies Over The Ocean a capella. It sounds like nothing else on the record and yet it brings everything full circle. Perfect.

The album is out now on Think Loud Entertainment, and available from all digital outlets. This record belongs in your collection and is easily one of my favorites of 2014.

One thought on “The Shackeltons – Records”