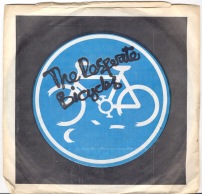 The years immediately after the 1st wave of punk resulted in some fantastically diverse musical genres. Post-punk and new wave were great, but I’ve always been enamoured with the DIY scene of the late 70’s (that’s Do-It-Yourself for those of you who are anti abbreviation). Bands took out the middlemen and recorded / released the records on their own. There was some overlap with punk (The Buzzcocks come to mind), but most of these bands had a ramshackle quality that conveyed its own unique charm. The Desperate Bicycles formed for the sole purpose of releasing a record (sample lyric: “It was easy, it was cheap, go and do it!”) and can best be described as the missing link between The Fall and Television Personalities. The band released material from 1977 to 1981, including their sole album, Remorse Code. Released in 1980, it displayed a fuller sound in comparison to the preceding singles from ’77 and ’78. Whereas the earlier material got by on sheer enthusiasm, the album sounded like it was performed by a band with musical chops. I love every single track this band has put out, but I have a special affinity for Blasting Radio, the closing track from Remorse Code. Opening with one of my favorite lines in music “I feel like one half of a sandwich”, it proceeds to find a home in the listener’s heart over it’s 4 1/2 minute run time. A melody anchored to the bouncy bass line, you can’t overlook the guitar minimalism or Danny Wigley’s slithering vocals. A perfect musical document from the late 70’s / early 80’s DIY scene. The band has steadfastly refused offers to reissue any of this material – fortunately their entire recorded output (minus a single recorded as The Evening Outs, after the Desperate Bicycles called it a day) is available for download here. I believe the band is ripe to be rediscovered by another generation (or two or three). Simply perfection.