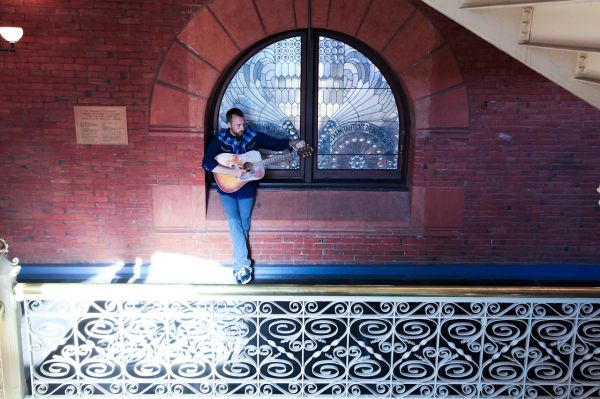 A few months ago, I received a nice surprise in my email – a promo copy of the new Heyward Howkins album, about a year after the debut. An unexpectedly quick follow-up, it quickly became one of my favorite records of the year. I reviewed it right around the release date here, and still have it in my regular rotation. I recently had the chance to catch up with Heyward and we had the chance to talk about music, Philadelphia, and you guessed it…coffee.

Jason’s Jukebox: Is there a song on the new record that stands out to you as being “near and dear” to your heart”? (if so, maybe expound a little on the song’s genesis)

Heyward Howkins: I set out to instill some of my personality and story into every song. I guess if I had to pick one it would be Be Frank, Furness. I think I really got that one right, especially lyrically. My storytelling can be a bit obtuse. I think Be Frank, Furness works well literally and leaves enough for the listener to interpret on their own. It could potentially be received as a bitter or angry song but it is actually quite the opposite. It is really a hopeful celebration of a kid (me) from the suburbs taking his lumps in and around a highschool in one of the toughest neighborhoods in Philly and emerging more seasoned and humble–more appreciative of what he has.

JJ: Are you doing any shows to support the record?

HH: I have a great 6 piece live band right now. We have a record release show on December 12th at Johnny Brenda’s in Philly. Hopefully more shows to come.

JJ: Can you tell me about the transition from playing for The Trouble With Sweeney to solo artist? Were you writing songs during your tenure with that band?

HH: I really credit that band as the catalyst for giving me enough confidence to write and perform my own songs. I had a bunch of four-tracked demos at that time an before but I never let anyone hear them. I wrote some of the music in TTWS and started helping out with backing vocals toward the end of our run. I can confidently say that I absolutely would not have ever released my music if I had not been asked to join that band in 2000 serendipitously. Joey Sweeney was also a big supporter of my music and helped me out in the early stages.

JJ: Philadelphia seems to be a pervasive influence on your solo work – something I can relate to. What’s your take on people from Philadelphia proudly letting the world know where they are from?

HH: Yeah. Sometimes I think about moving away from the Philly area but it is really the only place where I am really comfortable. Little known fact: I am a huge Philly sports fan of meathead proportions. I can appreciate people proclaiming their love of Philly. I yell at the TV and everything when I watch football. Philly really is the perfect combination of size, culture, historical significance and even natural beauty. It is small enough and diverse enough to have a great music scene where people have a decent chance to standout above the static.

JJ: Who would you consider to be your primary influences?

HH: I think it would be an even split between 80s new wave (The Cure, Depeche Mode, The Smiths) and folk (Bob Dylan, Nick Drake, John Fahey). I don’t listen to much current music although I do really like Cat Power and Antony & The Johnsons a ton.

JJ: How have distribution methods changed your methods for reaching an audience? (Bandcamp, Itunes, etc..)

HH: When I played in TTWS we had to tour a ton to sell CDs and get the word out there. The amazing thing about bandcamp and iTunes is that I can have a worldwide impact w/o leaving Philly.  Shockingly, my music gets played a bunch in eastern Europe; Latvia, Estonia, Italy…..I am a regular Hasselhoff (JJ note, that’d be Michael Knight) . I have sold as much music overseas as in the US.

JJ: Who would you consider to be your favorite artist to hail from Philadelphia?

HH: That’s a tough question. My favorite current bands from this area would have to be Light Heat (formerly Mazarin-Quentin from that band also mixed my record), Birdie Busch, and The Spinto Band/Teen Men. I am wracking my brain for older artists to hail from Philly. I like Hall & Oates just fine!!I forgot about The Hooters too. They used to play mixers/dances when I was little. One of The Hooters (JJ note, the band not an employee of the restaurant) once looked at my folks house when it was up for sale.

JJ: I’m going to reveal myself as a closet hair metal and mostly clean-cut hip hop fan, my favorites are probably Cinderella and DJ Jazzy Jeff & The Fresh Prince! Nostalgia seems to be alive and well with Generation X – bands are reforming all the time and touring. What are your thoughts about this Pixies-ish movement? Would that ever happen with The Trouble With Sweeney?

HH: I have to say I am pretty jazzed about going to see Neutral Milk Hotel in January. I missed out the live band the first time around. I thoroughly enjoyed the Pavement reunion a few years back as well. TTWS played a one-off show last year for Joey Sweeney’s birthday. It was great because I got to play loud rock guitar. I am holding out hope for that elusive The Smiths reunion show. I think I would fly to the UK to see that.

JJ: I love Neutral Milk Hotel, that’ll be an amazing show. I would love to see The Smiths reunite as well, I guess stranger things have happened! This segment is called “Coffee Chats”,  so I have to ask…what’s your drink of choice?

HH: I am bad when it comes to coffee. I drink like three cups of black coffee before I even arrive at work. I don’t know if it’s by choice–I think it chose me. I am hooked.

JJ: That just might be my favorite answer to the drink question so far!

It was a real pleasure catching up with Heyward Howkins – admittedly, it made me a bit homesick for my homeland of Philadelphia. His new record is out now, and you can be sure it’ll pop up on my geeky version of a “Best of 2013” list later this month. Make sure to check out his Bandcamp site to stream / purchase music. Both albums offer up a unique Americana by way of Pennsylvania vibe and belong in the discerning music fan’s collection. Promo photo at the beginning of this piece is by Kate Harrold and is used with permission by the artist.