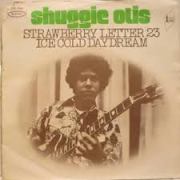 Sad to say, but I first became aware of Shuggie Otis with the 2001 David Byrne assisted reissue of 1974’s Inspiration Information. The CD cover hinted at some hip world of unheard acid jazz soul power and the music followed through on that promise (though the 2001 reissue cover wasn’t the original sleeve). As much as I loved the entire record, the track that I had instantly had to play over (and over) again was “Strawberry Letter 23”. The song was originally a part of Shuggie’s 1971 record, Freedom Flight, but was tacked onto the reissue as a “bonus track”. The song effortlessly encapsulates exhilaration, melancholy, and longing all within the span of its 4 minute run-time. The music breezes along on a ridiculously catchy groove making the moment when everything fades away with Shuggie singing “If you arrive and don’t see me / I’m going to be with my baby / I am free, flying in her arms / Over the sea” resonate all the more deeply. The track has been covered by quite a few acts (notably, The Brothers Johnson version hit #5 and is the version most people have heard). It was also featured in the Quentin Tarantino film Jackie Brown as well as the hit TV show Six Feet Under. This is one of those songs that gets under your skin the 1st time you hear it and never wears out its welcome. The lyrics quoted just above hint at the way the words effortlessly flow in poetic fashion. Truly, a masterpiece in words & music.