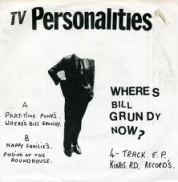 Any scene or movement naturally opens itself up to the mockery of outsiders. In the late 70’s Daniel Treacy & Edward Ball led a few acts that were associated with the punk scene, though the music was simultaneously more melodic AND shambolic. O-Level (Ed on vocals) made fun of fake punks by way of the song Pseudo Punk. Television Personalities (Dan on vocals) tackled the topic from a slightly different angle on their 2nd release of 1978, Part Time Punks. The music feels like it will all fall apart at any minute, sounding like teenagers practicing music at home (in fact, that is exactly what it was). It feels more in line with what was labeled “twee” or the C-86 scene of the mid 80’s and not punk. The chorus is a joyous sing-a-long “Here they come / la la la la la / the part-time punks”. The Clash and Swell Maps get a shout out (among others). This is probably the most famous song by the TVP’s and showcases a lighter side of the band before they explored a darker path (sans Ed Ball). This is a must have track for any fan of the late 70’s punk, DIY, and post-punk scenes. I love these lyrics:

They play their records very loud
And pogo in the bedroom
In front of the mirror
But only when their mums gone out
They pay 5 pence fares on the buses
And they never use toothpaste
But they got two fifty to go and see The Clash.
Tonight!