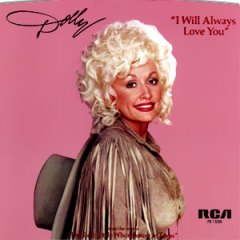 “I Will Always Love You” is a song that will now always be associated with the tragic life of Whitney Houston. In fact – I’d be willing to gamble that quite a few people don’t realize that Miss Houston didn’t pen the song due to the popularity of her version. The song was written by Dolly Parton in 1973 and released as a single on June 6, 1974 (she later re-recorded it in 1982 for the soundtrack to the film The Best Little Whorehouse in Texas). Dolly Parton had gotten her start singing girl group type songs (she appears on several of my 60’s girl-group box-sets, most notably One Kiss Leads to Another). She didn’t really hit her stride until she hooked up with Porter Wagoner as part of his syndicated television program. Several duet albums followed with several chart hits in the early 70’s. The professional partnership had reached its logical conclusion by 1973 or 1974 and Dolly captured all of her feelings about the end of this relationship in “I Will Always Love You”. While I can appreciate the Whitney Houston version, restraint goes a long way in my book. The way the words roll off Dolly’s tongue, the sadness lurking – it’s all there for us to experience for eternity. Author Curtis W. Ellison stated that the song “speaks about the breakup of a relationship between a man and a woman that does not descend into unremitting domestic turmoil, but instead envisions parting with respect – because of the initiative of the woman.” I couldn’t have said that better myself. Key lyrics:

And I hope life, will treat you kind
And I hope that you have all
That you ever dreamed of
Oh, I do wish you joy
And I wish you happiness
But above all this
I wish you love
I love you, I will always love

2 thoughts on “Dolly Parton – I Will Always Love You”