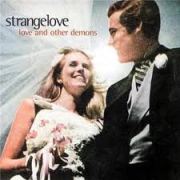 The mid 90’s were a glorious time to be a music junkie. The Britpop era was in full force and it seemed like every week there was another new band or record that was a “must have”. These were the days before Itunes, torrents, and Bandcamp made it easy to discover new bands and download new songs almost instantly. My routine would usually consist of driving to Siren Records in Doylestown, PA to see if they had what I was looking for. If they didn’t have what I needed, I’d cruise up I-95 until I arrived at the exit for the Princeton Record Exchange. Once I was inside the corridors of the record store, time seemed to stop. I’d wander endlessly (after trading in a ridiculous amount of CD’s for credit, of course). If I didn’t have something in mind, I’d check each CD’s cover art to see if I could figure out what kind of music was waiting for me. And this is the story of how I discovered Strangelove – one of the 50 bands or so that live in my “top 5 of all time” (something like that).

Strange as it may seem, I had no idea who Strangelove were in 1996. They had already had a buzz worthy record in 1994 and were on the Food record label (home to Blur and Suede). I knew none of this. All I saw when I picked up the CD at the Record Exchange was a very retro album cover that hinted at darkness beneath bliss. I examined the liner notes just a bit and noticed that Brett Anderson of Suede was listed as a guest musician. The wheels in my brain began to turn and I have to admit to being a full on geek in anticipation of what this record could sound like as I popped the CD into my CD Discman / cassette tape player set up in my Cavalier Z24 (it was black). The 1st song didn’t immediately grab me (more on that later), but as the album progressed I realized I had stumbled upon a masterpiece. I’ve collected every track the band put out and followed lead singer Patrick Duff through his post Strangelove days, but nothing hits me in the heart more than their 2nd record, love and other demons.

forget the very essence of  yourself (album breakdown)

Living With the Human Machines – the album begins with aggressive guitar and emotional pleading from lead singer Patrick Duff. It is slightly uncharacteristic of the record and took me a bit to appreciate the damaged beauty of the song. It is now one of my favorite tracks from the record. The dual guitar interplay of Julian Pranksy-Poole and Alex Lee really takes the song to the next level. Britpop era, yes – but this doesn’t sound like Britpop. Punk married to glam married to the darkest Suede songs, this is perfection. Key lyrics:

Hey Jesus, won’t you come on down?
Why don’t you show yourself?
We need you more than ever now
Preacher, ever since you’ve gone
This world’s been going crazy
Going crazy, going wrong
This is a message to the sky

Beautiful Alone – it is only fitting that the band followed the most aggressive track on the record with a track that screams “SINGLE!”. This should have been a huge Britpop hit, but stalled at #35 on the UK charts. Strong chorus, lyrics that resonate, and an urgency that seems to have fit what would have been played nonstop on the radio in the mid 90’s. An impressive single. Key lyrics:

Sway – Epic strings open the track before acoustic guitar enters the mix. Patrick Duff’s voice conveys emotion in a way that really is unsettling. The track builds towards an orgasmic chorus that is breathtaking. A ballad for the ages, not just for the Britpop era. Key lyrics:

20th Century Cold – Shimmering guitar hook full of melody – the only thing dated here is the title of the song. There is a feeling of dread permeating as the song builds towards its anthemic chorus. It comes back to the guitar line and the verses continue on full of mystery. Patrick Duff’s vocal performance recalls Depeche Mode’s David Gahan with a just a bit more evil in his delivery. Key lyrics:

She’s Everywhere – Unrequited love is a topic that comes up often in words & music – this track is an example of those thoughts perfectly executed. It is performed as a lament that builds in intensity as the song progresses. A song for those lovers and friendships lost throughout life, 5 minutes to remember those good times and wonder what could have been. Key lyrics:

#1432 – I view this track as an addendum to the previous track. At 1:37 it is by far the shortest track on the record, but no less affecting. Acoustic guitar based, it reeks of loneliness and depression and covers the same topic as the previous track – though on a more personal level. Key lyrics:

Casualties – aggression comes back into focus after the previous ballad type songs. The guitar lines provide a provocative backing as the music seems to be becoming progressively darker as Patrick Duff sings of his despair. The last 2 minutes of the track transform into some sort of noisy jam as the refrain “we are all going down / forever, together, forever” is repeatedly sung in angry tones. Perfection. Key lyrics:

The wind’s picking up as our words become
The litter of the night before
Words that seem so empty now
Blowing round the room, getting twisted and torn

Spiders and Flies – A mellow beginning to the song with Duff crooning his way across the 1st minute or so before the listener is jolted into an aggressive bridge (with a dated lyric about the telephone dead on the internet. ah, dial up). It segues into a chorus that retains the aggressiveness but also brings back some of the crooning. It is an evocative track and perfectly executed. Key lyrics:

Elin’s Photograph – for a record that has provided so much enjoyment over the years, it really has some downbeat lyrics. This treads the same territory as “Pictures of You” by The Cure but does so in a much more effective manner in my opinion. If you’ve followed this article so far, there isn’t a whole lot different here – emotional vocals, unrequited love, catchy guitar lines. It is all just so perfect though (again). The double tracked vocals are a nice touch. Key lyrics:

The Sea of Black – the epic concluding track does a great job of building atmosphere throughout its entire 8 minutes and following up moments of released tension with soothing emotional interludes. It can serve as a mini-capsule of the entire album’s methodology. Key lyrics:

For whatever reason Strangelove didn’t seem to get the recognition they deserved during the peak of the Britpop era. Here we are 17 years or so later, and they aren’t getting any press in the retrospective articles being written about that time period. That is a shame – Strangelove were just as strong of a band as many of their peers and my absolute favorite band from that era. Do whatever you can to hunt down a copy of this record – it may not change your life like it did mine, but it’ll find a spot within your heart. Like that guy from The Men’s Wearhouse “I guarantee it”. Join me next month as I discuss In Utero by Nirvana.

One thought on “Strangelove – love and other demons”