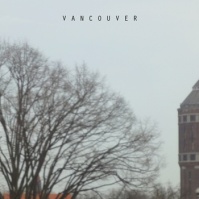 I’ve been to Vancouver, B.C. about a dozen times over the years (maybe more). People not from the Pacific Northwest may look at the close proximity of Seattle, WA and think “There can’t be that much of a difference.”. They’d be wrong. Dead wrong. Once you cross over the Canadian border, you are left with the distinct feeling of being in a foreign land (I jest, ever so slightly). Gone are US Dollars, replaced with coins called “Loonies” and “Toonies”. There is a suave European flavor in the city that sets Vancouver apart from its other Pacific Northwest cities (other than Victoria, also in B.C.). The band Vancouver isn’t from Canada (though they’ve had this record pressed there). They are, however, a bit different.

Vancouver brings a distinctly European flavor to the post-punk music by way of Athens, Greece. Raw and melodic, the record’s 7 songs breeze by and will have you pressing the “repeat” button the instant the record ends. The band consists of Giannis on drums, Stelios on bass, Nikos on guitar and Aristeidis on vocals. They formed in 2011 over a shared love of atmospheric post-punk. The band considers The Chameleons, Joy Division, and Sad Lovers & Giants to be huge influences – all bands that I adore. Throw in the modern influences (Soviet Soviet, Holograms, Iceage) and you have the unique blend that makes up the band Vancouver.

we will surf on the waves of our minds (album highlights)

Soul Hollow opens the album with chiming post-punk guitars and echo enhanced vocals before the band kicks in. There is an appealing rawness to the mix that really makes the emotion shine through. Key lyrics:

Zion vocals mixed a bit lower, giving the song an otherworldly feel. Heavy bass, sounds like something out of the late 70’s – in other words, perfection. Impassioned vocals with lyrics that almost impossible to understand – not a bad thing, as it all lends to the ominous atmosphere.  The song builds towards a stunning noisy coda which is perfectly executed. Key lyrics:

Outsurfing, making up – catchy, infectious, hit single? This song could be any of those things. Heavy drums before melodic bass kicks in, carrying the song towards greatness. Vocals pack a visceral punch, wailing and flailing their way around the words. Curiously, this one is listed as a bonus track – what a bonus! Absolutely stunning to these ears. Key lyrics:

This is a record that comes highly recommended. You can pick up a copy of the album via the band’s Bandcamp site located here. The album is the perfect length – 7 tracks that surprise, engage, and resonate with the listener. 2013 is already shaping up to be a great year in music, make sure to check this one out.

Verdict: Left of the Dial stunner

For Fans of: Interpol, Joy Division, The Chameleons, The Cure, Pavement