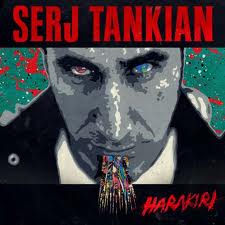 “Harakiri: ritual suicide by cutting the abdomen: it is called seppuku by the Japanese, and was practiced by high-ranking Japanese of the military class in lieu of execution or to avoid disgrace”

Good old Serj stays true to himself on his latest solo record – incorporating his metal-ish past with System of a Down into a wholly original cocktail of tunes about the hypocrisies of politicians and the emptiness of reality TV. During their 1st run at serious fame I pretty much ignored System of a Down. Seemed a bit contrived to me, a little too mainstream (yes, I was still fighting my indie hipster tendencies back in the early 00’s). One evening in 2005 I happened to stay up past midnight (WHOA!) and caught Saturday Night Live! The musical performance that evening was by System of a Down playing their new single B.Y.O.B. Old school SOAD fans will despise me for saying this – but I thought the vocal interplay between lead singer Serj Tankian and guitarist Daron Malakian gave the band a far more interesting element and the performance of B.Y.O.B. opened my eyes – changing me into a hardcore fan immediately.

When System of a Down went on hiatus in 2006 I was incredibly bummed. I had really enjoyed the 1-2 punch of the records Mezmorize / Hypnotize and was eager to see where they were going to go next. The two main projects to come out of the temporary split (though SOAD are touring again there has been no new recorded music) were Daron’s Scars on Broadway project and Serj Tankian’s solo career. Both debut releases were solid, if not spectacular affairs. I missed hearing Daron and Serj’s voices…together. Though Scars on Broadway haven’t released anything else, Serj quickly followed up with his 2nd studio record as well as record of him playing live with orchestra. Both records – though not perfect – stood on their own, making me mostly forget how much I missed Daron harmonizing with him.

When the new Serj Tankian record was announced it almost seemed…too soon. He is cranking out records at a healthy pace (by today’s standards, that is). Early write ups suggested Serj had found a way to combine all of the disparate elements of his solo career and System of a Down into an intoxicating blend. After listening to this record repeatedly since purchase, I’d have to agree. This is a masterpiece of a record with cutting lyrics – one can only wonder what Serj had in mind by naming this record Harakiri.

The TV sly stares at me….(highlights)

Figure It Out has a very aggressive introduction sounding like something off of System of a Down’s self titled debut album. Serj wails away in his distinctive voice. All of the music fades out as the chorus devolves into a chant / rap. The drum and bass interplay is incredible on this track. Key lyrics:

Occupied Tears When I first saw the title of this song I thought maybe Serj had written a song about Occupy Wall Street. Silly me – Serj has much bigger things in mind. A haunting, slower vibe to start the song. Operatic vocal tones building towards the rousing chorus. Almost a pop metal feel twisted into a Serj Tankian song. Key lyrics:

Holocaust, you taste the great fear
How can you just occupy another child’s tear?

The faint cries of lost limbs.
Mimes surrounded by mines.
Without warning signs of the great sacrifice.

Reality TV – its safe to say that Serj and I agree on at least one thing – we abhor reality TV. Very catchy beat to this song, the lack of guitars at first is kind of curious – but they come into the mix in full force with the chorus. Not quite as edgy as some of the other tracks but it features some great lyrics and vocal workouts in a way that only Serj can pull off. I’d like to see this song become the soundtrack for Househunters. Key lyrics:

Fundamentally mental, deprived of meaning,
Hedonistic theatrical entropy
The gaining of lost confidence,
From the failures of others cheering
“No, that can’t be me”

This album is the highlight of Serj Tankian’s solo career thus far. The lyrics are cutting but poignant, the music matching the intensity. Who did Serj have in mind when he named the album after Japanese honor suicides? Your guess is as good as mine – but one thing I know – Serj tells it like it is and spares no political party in his healthy rage for truth.

For Fans of: System of a Down, Alice in Chains, Wyclef Jean, Scars on Broadway