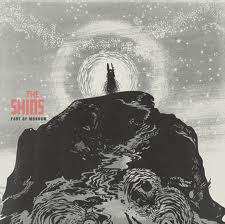 The movie Garden State hit home on several levels. Zach Braff was amazing in the TV show Scrubs but hasn’t always connected with me as a “movie actor” – here he was absolute perfection. His character returns home to New Jersey to deal with the death of a loved one. Having been away on the west coast for years, he struggles to connect with his past while also embracing the future. I’m haunted by this movie every time I visit Philadelphia, PA as for the last 10 years I’ve staked a new life out on the “Western Frontier”.  A key scene in the movie involves Braff and the female lead, Princess Padmé Amidala….I mean, Natalie Portman. Both characters connect in a hospital waiting room while The Shins “New Slang” plays on Padmé’s headphones. She states to Braff’s character “You gotta hear this one song — it’ll change your life; I swear.” Curious words for an indie band, but ones that can now be seen as prophetic.

Each album by The Shins has seen a progression of sound with an increased focus on atmosphere and dense production. This seemed to reach its natural conclusion with the 2007 release of Wincing the Night Away. My suspicions seemed to be confirmed with the announcement of a new group with Danger Mouse, Broken Bells, and the 2010 release of a self titled record. In all honesty, the Broken Bells record seemed to leap out of my headphones, hitting me on a level that The Shins rarely had (with the exception of “St. Simon” off of Chutes Too Narrow). Danger Mouse seemed to be the perfect partner in crime for Shins mastermind James Mercer and I assumed Mercer’s previous band had been laid to rest. I was curious when I read about a new record coming out in 2012, and was even more intrigued when I finally could listen to it. Port of Morrow is a very good album – outright stunning in places. Mercer’s partnership with Danger Mouse in Broken Bells has provided a new element to The Shins.

Opener “The Rifle’s Spiral” is a bitter opener, the guitar refrain announcing the albums intent. There are electronic flourishes throughout the song, sometimes manipulating Mercer’s voice. Key lyric: “You’re not just invisible – NO – You just don’t exist”

“Simple Song” is the lead single off the record and is a 60’s style girl group song with a warm melody. Somehow recalls both The Beach Boys and early 90’s indie music simultaneously.

“It’s Only Life” is a slow ballad-ish lament, it makes wonderful use of Mercer’s falsetto. It reaches an emotional apex as the words “Now you’ve got this worry in your heart” come pouring out, almost like listening to someone’s diary. Stunning.

“September” The lyrics hooked me right away on this one “Into this strange elastic world…” Another ballad with heavy echo on the vocals, a very clear Danger Mouse influence presenting itself. This song has echos of “St. Simon”.

“Fall of 82” – This song feels instantly familiar, has an 80’s vibe (how clever Mr. Mercer, how clever). Joyful vocals, a positive song. Key lyric “You moved back with us in the fall of ’82 / I fell into dark times and you were there to help me through”

“Port of Morrow” – The title track would have fit in on the Broken Bells record. The song starts off with James Mercer singing in a very very high voice (I almost thought it was guest female vox at first). There are washes of synthesizers throughout the song, it brings to mind classic 80’s new wave. A perfect conclusion to the album.

Was the 5 years away (as The Shins) worth the wait? Absolutely, partner. I really like this album and it will get repeated spins from me. However, I can’t escape the feeling that this may have worked even better as a full on collaboration with Danger Mouse as the second Broken Bells record. This album won’t change your life (sorry Princess Padmé). But it will hold your attention, make you smile, and make you reflect on the past a bit. Well done Mr. Mercer. Well done.

This album is available online at Itunes and Amazon and in most stores that carry cd’s.

2 thoughts on “The Shins – Port of Morrow”